The family of late Baba-Aji Mamman, identified as a former staff of the Yobe rural electrification board, says it has refunded N11 million to the state over Mamman’s “absence from office”.

The family made the announcement on Wednesday in a statement titled ‘An Appeal for Forgiveness from the General Public and Staff of Rural Electrification Board, Damaturu, Yobe State’, and published in the Daily Trust.

According to the publication, the family said they acted on the instruction of the late Mamman, who reportedly died on March 28, 2020.

The deceased was said to have instructed his family members to return an equivalent amount of his salary for 11 years to the state government.

The family of the deceased said he attended work for a few days weekly due to ageing and health constraints. 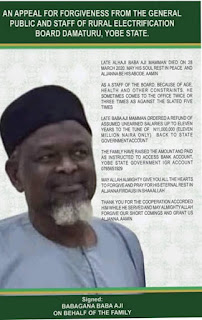 “As a staff of the board, because of age, health and other constraints, he sometimes came to the office twice or three times as against the slated five times.

“Late Baba-Aji Mamman ordered a refund of assumed unearned salaries up to eleven years to the tune of N11,000,000 (eleven million naira) back to state government account.

“May Allah Almighty give you all the hearts to forgive and pray for his eternal rest in Aljannafirdaus Insha Allah.

“Thank you for the cooperation accorded him while he served and may almighty Allah forgive our shortcomings and grant us Aljanna Aamin.”

Efforts to get the reaction of the state government were unsuccessful at the time of this report as there was no response from Muhammad Lamin, commissioner for home affairs, information and culture, when contacted.

GIRL WHO ALLEGEDLY HAD SEX WITH DOG FOR N1.7M IN VIRAL VIDEO DIES OF INFECTION

LADY KIDNAPPED, STRIPPED NAKED WHILE ON VISIT TO FACEBOOK FRIEND IN IMO

PROFILE OF LATE SEN ARTHUR NZERIBE: END OF AN ERA

WE ARE BRIDGING THE GAP...

Bringing government closer to the people.

The National Working Committee has approved that in the event of unforeseen logistic situations activities of the Senatorial Primary may extend to Tuesday, May 24, 2022.

The NWC further clarifies that by virtue of Section 84(8) of the Electoral Act, 2022, those qualified and eligible to vote as delegates in the forthcoming Primaries and National Convention of our great Party are the three (3) AD-HOC Delegates per ward, elected at the Ward Congresses and one (1) National Delegate per Local Government, elected at the Local Government Area Congresses.

All aspirants, critical stakeholders, leaders and teeming members of our Party should please take note.

#PHOTOS: RETROSPECTING THE CELEBRATION OF LIFE OF A GONE LEGEND, AN IROKO OF HIS TIME, LATE NZE JOSEPH AZUBUIKE OPAH(Funeral 2) - Abia Online

#PHOTOS: RETROSPECTING THE CELEBRATION OF LIFE OF A GONE LEGEND, AN...

© DISCLAIMER: The opinions expressed except where they originate from Abia Online, represent the views of such authors. Abia Online shall not be held liable for such personal views as canvassed. COPYRIGHT : All rights reserved. No part of this publication may be reproduced, distributed, or transmitted in any form or by any means, including photocopying, recording, or other electronic or mechanical methods, without the prior written permission of the publisher, except in the case of brief quotations embodied in critical reviews and certain other noncommercial uses permitted by copyright law.